Have you ever wondered how is it possible to have a “floor” on price on any goods? 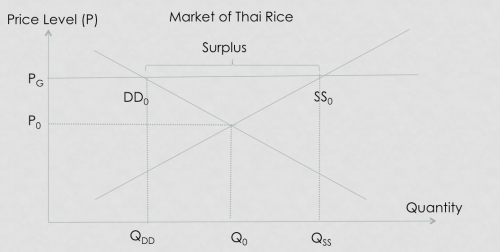 In the scenario of Thai rice, when PM Yingluck Shinwatra (now facing trial) took over powers in Thailand 2011 General Election, one of her populist votes is to offer rice farmers income protection. How is income protection related to price floor? So initially, supposing the Demand and Supply of Thai Rice is at equilibrium at P0 and Q0. The Thai government announced that a price floor of PG will be imposed on top of P0. The price floor artificially raised price of rice from $271/ton (P0) in July 2011 to $500/ton (PG) in September 2011. At PG, there will be a surplus of rice where quantity supplied by thai farmers is greater than quantity demanded by Thai consumers / the rest of world.

The surplus of rice will then be purchased by the Thai Government at inflated PG, thus, providing an implicit income guarantee and subsidy for rice farmers. How does it impact Thai Economy?

From this example, we can see that politics and economics are closely related. In order to win votes, there are many tools available to a politician to use, and price floor is not necessary one of them. However, not every tools politicians use are of the best interest of the economy!

Another popular yet similar variation of a price floor is a minimum wage: 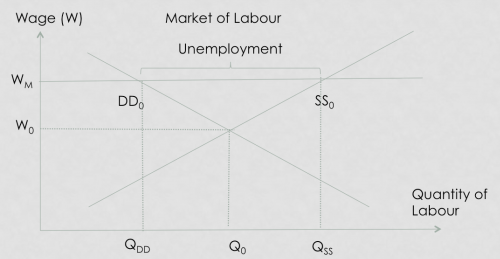 Like price floor, the government intervenes in the labour market and imposes a higher wages at Wm instead of the equilibrium price at W0. Unemployment occurs at the gap between amount of labour demanded QDD and amount of labour supplied QSS and can be broken into two parts:

A popular example would be the recent wage mandatory wage hike for MacDonald’s in the US. Here are some points to note:

In my classes,  I will be regularly referring to real life examples to relate to complicated diagrams like this. If you find this article interesting and easy to digest, please consider my regular classes and let me help you to score your A in Econs!